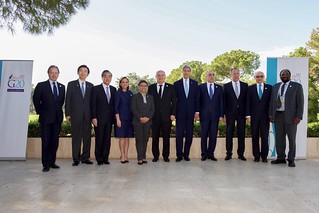 What are the priorities for the French presidency of the G20 in 2011?

The G20 has provided collective and efficient responses to the worst financial crisis since the 1930s.

In 2011, the G20 will seek to conclude the existing actions designed to tackle the root causes of the crisis, and will broaden its agenda to include new actions aimed at sustainably improving global stability and prosperity.

Only the G20 has the power, authority and decision-making capacity to provide the crucial impetus to further today’s major economic projects. It will do so via the following actions:

G20 countries account for 85% of global output, and the G20 is a key body for ensuring coordination of economic policies over both the short and longer term. Over and beyond its leadership during the crisis, the G20 has created the Framework for Strong, Sustainable and Balanced Growth, whose goal is to redirect national economic strategies in a direction that provides greater benefit for the world economy. France will continue these efforts in 2011 and will follow up on the commitments made in Seoul, whereby each member of the G20 agreed to implement measures tailored to national circumstances to reduce macroeconomic imbalances and boost global growth.
More:
Framework

To strengthen financial sector oversight on a lasting basis, it is crucial that France ensures a thorough implementation of the rules agreed to by the G20. France will also work to stiffen the rules wherever they have proved missing , for example with respect to regulation of the „shadow banking system“ (i.e. the non-bank financial institutions whose practices are not regulated) and concerning financial market integrity and transparency.
More:
Financial regulation
Fighting corruption

The recent past has witnessed high exchange rate volatility, increased global imbalances and ever-increasing stockpiling of foreign exchange reserves by emerging countries seeking to protect themselves against sudden, large-scale capital flight.
France would like to establish collective responses to these deficiencies to avoid exacerbating global imbalances.
More:
Reforming the IMS

Our economies need modernised international institutions that are capable of effectively regulating globalisation. France will seek to support the G20 in its role as the premier economic cooperation body. France will also strive to foster more consistent economic, social and environmental actions by the dedicated international institutions, and to identify areas in which this governance is inadequate. In particular, synergy between the G20 and the United Nations will be strengthened.
More:
Reforming Global Governance

6 – Working on behalf of development

Today, the G20 — which accounts for 85% of global output and two thirds of world population — is seen as an appropriate body for providing concrete solutions to development issues. The Seoul Summit in November 2010 represented a crucial milestone in this regard, with the adoption of the first G20 action plan on development. During its presidency, France will seek to raise this priority higher on the agenda.
More:

1/3 Photo: the Presidential Press and Information Office A speech at the opening ceremony of the World Economic Forum in Davos. January 26, 2011 Full captionFull caption|||Minimise

News map: in the Russian regions / in the world